A Smartphone App Saved My Life

A Smartphone App Saved My Life

Her malignant melanoma was found at an early stage thanks to a clinical digital health study using a smartphone app conducted in the region of western Götaland, Sweden. A week later, the lesion was surgically removed, and today Susann is completely healthy.

“It is very likely that the mobile phone saved my life,” Susann Samuelsson says, a 38-year-old mother of two from the west coast town of Kungsbacka.

Thanks to the clinical study with the iDoc24 app, which found her malignant melanoma at an early stage, the lesion was surgically removed before it could spread.

“I was extremely lucky” she says. For Susann, it all began with an irritated mole on her back, which  had started to itch.

Since Susann recently had read a newspaper article about skin cancer, she went to the primary healthcare centre in Kungsbacka to have it examined.

DISCOVERED A LESION ON THE BACK OF HER THIGH

“At the primary healthcare centre, I met a really good doctor. He concluded that the lesion on my back was harmless, but because he saw that I had many moles, he checked my whole skin.”

The doctor noticed a mole on the back of her thigh, which Susann had not noticed before. The doctor thought it looked suspicious and asked Susann if she wanted to participate in an going research study using a smartphone app called iDoc24 with an attached dermascope – which is a magnifying glass with a light that amplifies a mole lesion and is used by dermatologist to diagnose skin cancer.

“I thought it sounded like a good idea that the family doctor would take two pictures of my mole and send them directly from a smartphone to a dermatologist at the dermatologist department of Sahlgrenska University Hospital in Gothenburg. I thought the study was very modern, a patient would receive a response within 24 hours from a dermatologist using a smartphone.” 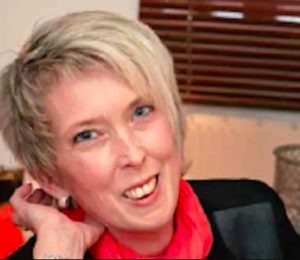 The very next day, Susann received a call from her family doctor. Her birthmark was very likely to be a malignant melanoma and needed to be surgically removed. A week later she had a surgery appointment at the department of dermatology at Sahlgrenska University Hospital. The suspicious skin lesion was surgically removed in local anesthesia and then sent to the laboratory for analysis.

After the surgery, a few days of anxious waiting followed.

“I was told that it was in deed a malignant melanoma, but at an early stage that had not spread. My tears rolled down my chin of joy and relief, I knew it could have been so much worse.”

Today Susann feels great. She will go for a yearly mole screening for the rest of her life. And she has now changed her sunbathing habits.

“I have always loved the beach and sunbathe , but now I will change my habit and it will be the end of it. I want to see my kids grow up.”