Interview with a pediatrician on children skin concern 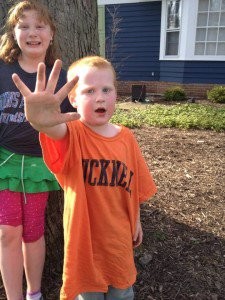 It is almost inevitable that small children occasionally develop some red spots or a rash – it is very common during childhood. The majority are harmless.

It is extremely rare to find malignant skin lesions in children, says Magnus Rehnström, pediatrician at the Sahlgrenska University Hospital with a special interest in children’s skin.

A nurse at childcare centers are trained to assess skin problems in babies and young children and can generally offer good advice. But sometimes you find yourself far from care or you would prefer a dermatologist to take a look at that rash.

Skin issues can be assessed fairly easily with the help of a good photographic picture and a description. The majority of skin issues are temporary and harmless.

Suddenly emerging rashes that cover the body of the child are often due to a virus, such as chickenpox, the fifth disease, or three day fever (roseola). Often – but not always – the child can have other symptoms too, such as fever. A normal functioning immune system usually takes care of it and the rash goes away quickly.

Hives is another rash that can progress rapidly and itch intensely. Hives can be induced by all kinds of things, such as a certain types of food, heat, infection, or insect bites. But in most cases it is difficult to pinpoint the exact cause.

Hives can affect both young children and adults. A calamine lotion might help, but sometimes there is also a need for an allergy medicine, which you can get from your local pharmacy with or without a prescription.

If a child has a sudden rash, you may want to try to keep track of what your child ate at that particular moment,  says Magnus Rehnström. There are some things that children are more likely to be sensitive to, for example, strawberries, peppers, seafood, and oranges.

Sensitive skin and eczema in children

The best way to prevent dry skin is to avoid washing too often. Also, avoid soaps, oils and creams unless there is a real need for them. Plain water is enough to keep the skin clean in most cases.

There is no need for either shampoo or soap during the first two or three years, according to Magnus Rehnström. But you can actually create a need for these products by using them a lot.

However, eczema is a different story. This is a kind of rash that needs frequent application with moisturizing creams.

Young children, for example, often develop eczema when they start eating eggs, milk, or fish. Hypersensitive babies that are still breastfed may also develop eczema if the mother has eaten certain kinds of foods.

The sensitivity of the skin usually pass as the child gets older. But as a parent, you can try to exclude the food that you suspect is causing the eczema for a period of time.

So-called atopic eczema can be difficult to deal with. This type of eczema is caused by an inflammatory disease of the skin and can easily lead to a vicious cycle of itching and skin irritation. A child with atopic eczema may develop some other type of allergy as they get older. Hand eczema as an adult can be a problem in different types of work where hands are exposed to an irritant.

The skin becomes red, thickened, and itchy. Atopic eczema can often be seen around the eyes, the elbows, and the knees. Some kids get this kind of eczema more easily than others, and the tendency is partly hereditary.

Contrary to what the name suggests, birthmarks can show up long after birth. For example, new brown spots – moles – can turn up throughout life.

Moles in childhood are rarely dangerous. The kind of spots that sometimes develop into cancer are usually caused by sun exposure over many years, says Magnus Rehn Power.

Café-au-lait spots are a kind of birthmark that can be seen on areas with pigmented, light brown skin. Congenital or early birthmarks tend to grow with the child, sometimes up into the years of adolescence. After this, they normally do not increase in size.

Another type of birthmark is hemangioma – benign “blood vessel” that can be scarlet red, pink, or even bluish.

Hemangiomas can either be seen at birth or develop during the child’s first six to seven months of life. So-called strawberry marks, which are red and slightly raised patches, usually disappear by themselves within a few years, says Magnus Rehnström.

“Stork bites” or “angel kisses” (often on the neck or forehead) are common, superficial vascular malformations that also usually fade or disappear with age. But there are other types of hemangiomas, like the “portwine stain,” that do not usually vanish spontaneously.

These type of skin lesions usually have a special appearance. They can be captured easily in an photograph if you want to ask for a dermatologist’s assessment. There are some rashes that are very difficult to assess even with a physical examination. When suspecting a fungal infection, you may need a sample for analysis before a diagnos can be set, thus a visit to the pediatrician is needed.